Prosta, drummer and percussionist, is a holder of Bachelor of Music from University Malaysia Sabah (UMS). He has played for orchestras and did sessions with various local artists, including Miri Orchestra, UMS Sabah Community Orchestra and UMS University Orchestra and a variety of bands in Miri, Kuching and more. He is an educator – teaching, instructing and playing drums and percussions in an out of Miri and around Sarawak for many years and is the one called to set-up and arrange Drum Ensembles for special performances such as Asia Music Festivas, Gegar U Festivals, Rexona No Sweat Challenge Concert. He is also involved with opening act for famous Malaysian local bands, including Bunkface and Butterfingers, and has performed for Chief Ministers of Sabah and Sarawak. He himself too has done several sessions with local artists for shows produced  by Radio & Television of Malaysia (RTM) Miri. Currently, he is still going strong as a musical instructor based in Miri, a freelance music educator and actively serving in Miri Catholic church Music Ministry. 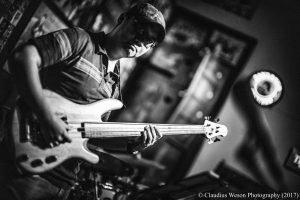 Tinus, is an accomplished electric bass and double-bass player, with a Bachelor of Arts (Music) acquired from UMS. He is currently an Audio Visual Senior Officer for his day job. Tinus trained as a bassist under the guidance from the top bassist of Malaysia. As a UMS student, he also has performed with UMS’ Orchestra, doing few sessions with RTM Kota Kinabalu and together with his band, Andalusia. During his time with Andalusia, he has written and recorded a single that has won a national television band competition hy ASTRO and bag the “Anugerah Juara Carta Lagu Artis Sabah” organised by RTM Sabah. Hence, the beginning of his live performance journey started when he performed with his band for corporate and government events in Sabah, backed-up local Sabah artist for RTM Kota Kinabalu. At Miri also he has performed with various local bands locally and for government bodies, namely RTM, KPSU, ICU as well as performing for Chief Ministers of Sarawak, Governor of Sarawak and Deputy Prime Minister of Malaysia. 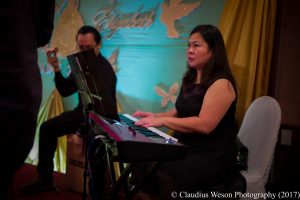 Thia is one of the well-known pianists in Miri. She is a holder of Bachelor of Music in Piano Performance and has started to perform publicly as early as 10 years old in Kuching, accompanied various singers, secular and church choirs. She was a member of Sarawak Symphony Orchestra (SONS), Symphony Orchestra OPM, Commonwealth Orchestra and National Symphony Orchestra. Thia has performed to a various audiences, which includes royal families, Panggung Negara, in and around Kuala Lumpur, Malaysia Philharmonic Orchestra (PETRONAS) as well as abroad such as Korea, Australia and China. Currently residing in Miri, she has played and backed up many singers, which includes Michelle Dennis, an American singer. They performed for various functions and events. Thia, together with Michelle and her band had performed in Rotterdam, The Netherlands. Currently, apart from performing with MasSuara, she is teaching piano at her music school, Vivace Music School. 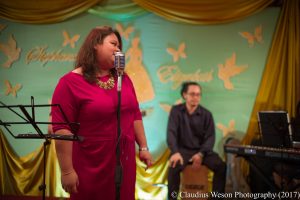 Grace, the vocalist of Massuara, is a singer like no other. She swingin’ the Swing, rockin’ the Blues, serenading the Soul in any area where you can hear the likeness of other popular artist. Grace’s voice trancends from Jazz to Soul to Blues and Funk, Latin and to the local traditional cultural genres, e.g. Irama Malaysia and Joget. The voice controls and techniques that she has was learned and developed from years of singing in the church choirs, home studios, various jamming sessions and has undergone intensive vocal training by a vocal instructor from Philippines. She sang with several local bands before settling in with Massuara. Being in the government sector, she has the chance to compete at the state level of singing and band competitions and has done well while at it. Her passion for singing has given her the motivation to keep on improving her singing technique that enables her to sing a variety of genres that later has helped Massuara to get competitive results. She has sung for various  government and corporate functions and has the chance to sing for Deputy Prime Ministers of Malaysia, the Chief Minister of Sarawak, well-known corporate bodies and various weddings. 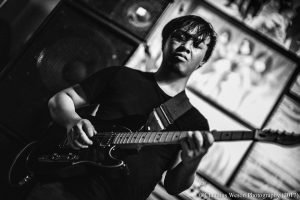 Lastly, Daniel is the youngest member in the band, Miri City’s very own and  also one of the few well-known Jazz guitarist in Miri. He graduated from International Music House in Kuching, has learned Blues and Funk before he pursue on developing his skills in Jazz while in the Academy. Even during his student days, he has performed as a cellist for Combined Orchestra Concert with local Kuching community for Sarawak’s ministers. As soon as he graduated, he joined local bands, performing for local clubs and lounges before joining Massuara. He did numerous recordings with RTM Miri and backed up local artist such Rose Iwanaga. Daniel is now a Music Teacher, teaching guitar at Sarawak International Music Academy (SIMA) in Miri.

In short, Massuara is a 5-piece band, emerging from various musical backgrounds, but with a shared musical passion. Jazz, Blues, Funk, Latin and Soul are their main musical genres. The next big event for their performance is during Borneo Jazz Festival, from 12-13 May 2017 at Miri City.

As the end note, feel free to share the album to your friends and families. For photography business (private event booking, photoshoot et cetera), you may contact me via Facebook message, Whatsapp or Instagram.

Music: Food for the Soul